US CFCs and the importance of implementing international tax advice

Clients who are owner/managers of international businesses operate in multiple jurisdictions. Owner/managers need to navigate their businesses through the of laws and regulations in multiple jurisdictions. Clients do not have time to learn the laws and regulations of each jurisdiction they operate in or plan to operate in to be able to immediately apply it to their current/prospective business structure. Clients will usually pay for the services of qualified and experienced advisors to work with them to create or amend their cross-border structures and arrangements.

In the US there are multiple courts at the state and federal level. These courts can range from local state courts all the way up to the US Supreme Court, which is the highest court in the US. However, the US cases we will be analyzing were heard in the United States Tax Court. The US tax court is a federal trial court where persons, being the petitioners, sue the Commissioner of the Internal Revenue Service (IRS), usually to dispute claims made by the IRS in connection to US taxes. We will be analyzing two cases: Flume v. Commissioner and Whirlpool Fin. Corp. & Consol. Subsidiaries v. Commissioner, to showcase the difficulty even multinationals with all their resources have in implementing tax advice provided to them for their international businesses. Both cases involved US persons who own foreign companies which operate as international businesses. In both cases the IRS believes the non-US companies are considered US CFCs and thus owed federal corporation tax on their subpart F income and accuracy-related penalties.

In the case Flume v. Commissioner, the IRS determined deficiencies in the petitioners’ (Mr. and Mrs. Flume) Federal income tax and accuracy-related penalties pursuant to section 6662(a)(1) for the 2006, 2007, and 2008 taxable years. The petitioners owned a company called Wilshire Holdings Inc which was incorporated in the Bahamas. In 2001, Wilshire Holdings’ domicile was changed to Belize. Prior to 2001, Mr. and Mrs. Flume owned bearer share of Wilshire capital stock. In 2001, according to the petitioners they each held 9% of the shares of Wilshire holdings, their daughter held 9% of the shares and the petitioners’ business partner Mr. Tornell, owned 73% of Wilshire holdings. The evidence presented of said share distribution were “articles of association” which were back dated to 2001. Mr. Flume was president and director of Wilshire holdings, with Mrs. Flume as the vice president. Mr. Flume, Mrs. Flume and their daughter are all US citizens. Mr. Tornell was classified as a non-resident alien under section 7701(b)(1)(B).

The IRS claimed Wilshire Holdings Inc was a CFC for the taxable years 2006-2008. The IRS based their claim on the fact that upon incorporation of Wilshire Holdings, the petitioners each owned 50% of the shares of Wilshire Holdings. The definition of a CFC under section 957(a) is, “any foreign corporation if more than 50 percent of – (1) the total combined voting power of all classes of stock of such corporation entitled to vote, or (2) the total value of the stock of such corporation, is owned (within the meaning of section 958(a)), or is considered as owned by applying the rules of ownership of section 958(b), by United States shareholders on any day during the taxable year of such foreign corporation”. The petitioners are both US citizens which under section 7701(a)(30), they are both US persons and are thus US shareholders of Wilshire holdings. Thus, Wilshire Holdings would be classified as a CFC.

It is therefore notable here that the petitioners failed not in the tax planning but in the administrative implementation of the international tax planning. Certainly, the failure to execute all corporate administrative paperwork and to begin such records ultimately has a high cost.

We find that many owner managers after receiving sophisticated legal tax advice, sometimes from multiple counsel, quite often cut costs on implementation of the requisite administration and other supporting realities of the arrangements.  This is a flawed approach especially in today’s era of information exchange and transparency. Thus, the Court held that the petitioners owned 100% of Wilshire Holdings and therefore Wilshire Holdings was a CFC for the years 2006 to 2008. The Court ordered the petitioners to pay the amount owed in taxes as well as the applicable tax penalties for the years 2006 and 2007.

No one knows what information or documents they will ultimately need as vital evidence at any point in the future or present. It is important therefore for Clients to ensure all arrangements are thoroughly implemented, administered and documented. The advice must be implemented in full.

Another example that shows failure to implement international tax advice into the business is shown by exploring this case regarding the IRC 954(d)(2) branch rules which can be found in the case Whirlpool Fin. Corp. & Consol. Subsidiaries (Petitioner) v. Commissioner (hereinafter “Whirlpool v commissioner”). 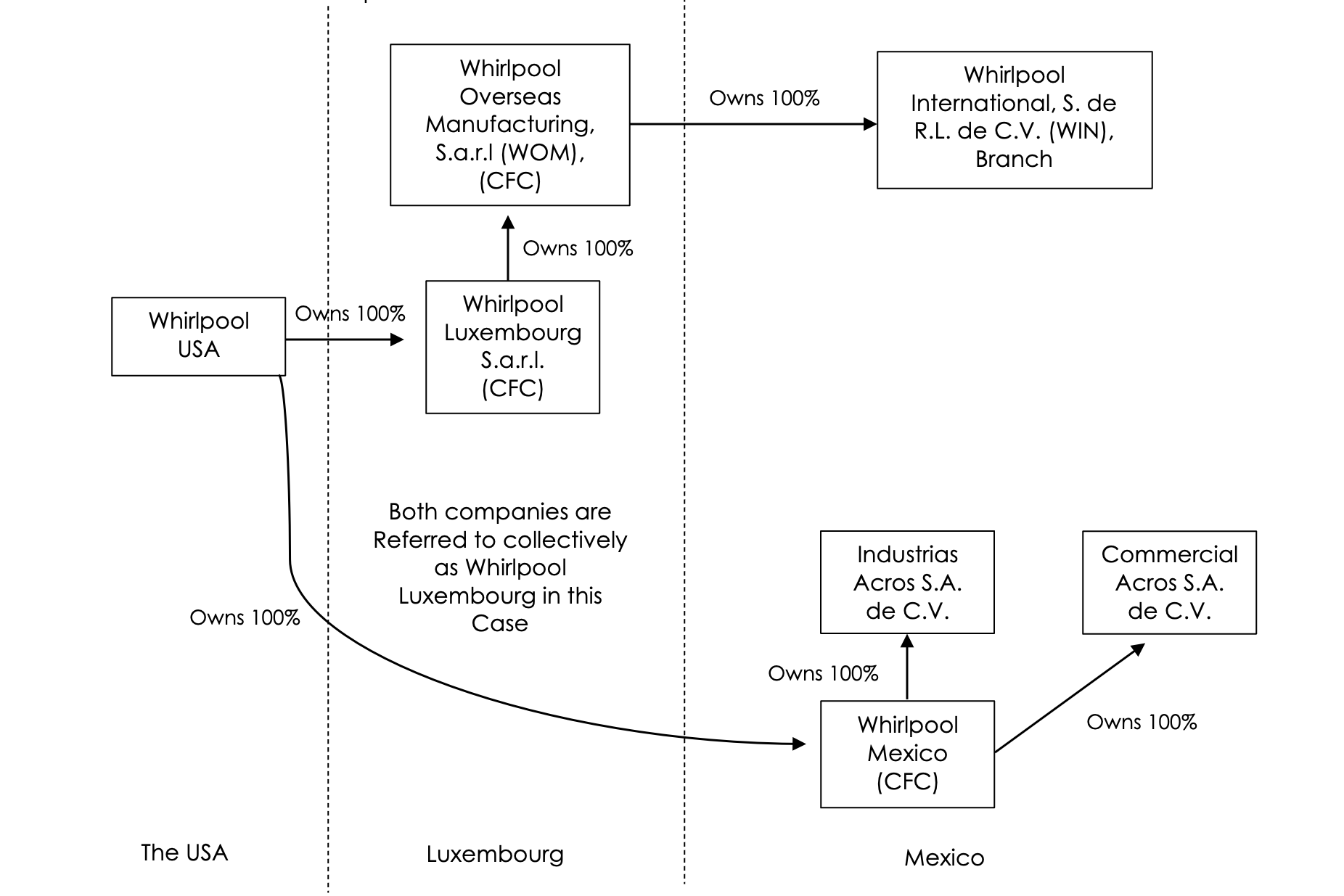 Whirlpool Luxembourg entered into a manufacturing assembly services agreement with WIN in 2007 and 2008. Whirlpool would provide machinery, equipment, and raw materials and WIN would provide manufacturing services. IAW leased land and buildings that housed the Ramos and Horizon manufacturing plants in Mexico to WIN. IAW and CAW seconded their high-level employees and subcontracted Rank-and-file employees both to WIN. Then WIN manufactured products which were sold to Whirlpool USA, Whirlpool Mexico as well as a few third-party distributors.

Whirlpool USA filed a motion for partial summary judgment, arguing that the sales income generated by the Mexican branch did not qualify as FBCSI under IRC 954(d)(1) as the appliances it sold were substantially transformed by its Mexican branch from the component parts and raw materials which were purchased.

The Tax Court ordered Whirlpool USA to pay the US tax liabilities and associated penalties of its subpart F income from Whirlpool Luxembourg.

Many of them do not even leave their offices to observe the day to day operations of the client’s business to be able to effectively advise them. It is important that clients obtain commercial international tax advisors who will work closely with them to ensure every aspect of their international tax advice in implemented and continue to work with them to ensure the arrangements continue to be operational.

Jonathan is an international tax lawyer who has been self-employed for over 15 years in the UK, Ireland, Barbados and for the last two years Florida and most recently Miami. Jonathan has worked with many jurisdictions including Barbados, Canada, Mexico, Brazil, USA, and Switzerland. Jonathan specializes in providing compliant, commercial cross-border tax structures for owner managed international businesses, investment funds and private clients utilizing a wide range of cross-border corporate, trust and business solutions.  Jonathan is a non practicing English Barrister, Msc Mathematical Finance, LLM International tax University of Florida Frederic G. Levin Law school.  Jonathan has completed the first year of an (SJD)PhD) taxation at UF Law, the research is on the international taxation of digital corporations and the implications of network effects and digital platforms for international transfer pricing rules.  Jonathan is an attorney at law Barbados.

Ryan DeGale is a serial entrepreneur currently residing in and working in Miami Beach Florida.

Ryan was born and raised in Barbados up until secondary school when  he then moved to the United States settling in Miami Beach but never lost his international outlook.  Ryan has been an athlete all of his life from track and field to Ju Jitsu.   Ryan was a Strength Coach for 10 years before opening Root Cause and has operated as an entrepreneur in Miami beach for the last ten years, culminating in the establishment of his training clinic “Rootcause diagnostics”.

Ryan works with many high stressed entrepreneurs, owners and managers of international businesses, who have Chronic fatigue as well as gastrointestinal issues.

Ryan has been trading and growing his own portfolio of capital for the last five years and actively working with a number of strategic mentors who have worked on Wall Street and like him trade their own portfolio. Ryan’s business development has led him to working with cross-border private equity, with some of his client base of international business owners and also into the world of international tax planning consultancy.

Ryan is an avid reader and golf player.